Dog Shows and the Illusion of Order 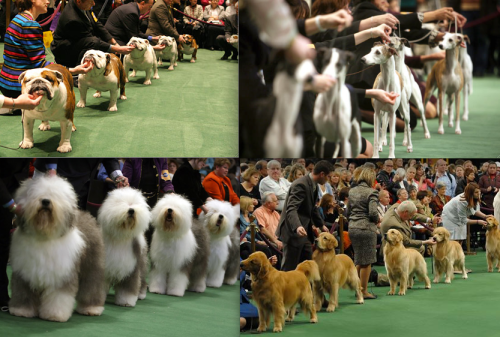 I spent two nights last week watching the Westminster Dog Show with several other contributors to this blog. There were a few conversations about how immoral and sometimes cruel dog-breeding can be and about all the other ways in which this spectacle might be offensive: You have to be a certain kind of rich to even partake. And it’s a kind of objectification that most of its viewers would find objectionable in any other context. The most analogous “sport” or contest I can think of has to be the child beauty pageant. But I won’t go into that or into the ethics of the breeding.

What I really want to write about is how this contest purports to sort and rank among the thousands of dogs that are escorted around that stage every year.

How does the contest presume to compare across dog breeds? How do you put a purebred, one hundred and twenty pound Great Dane next to a Pekingese or a chow chow and then determine that one is more deserving of the coveted “Best in Show” title than all the rest? The answer, obviously, is that you create some kind of frame and superimpose it onto the animals. You devise a sorting system to ignore the messy and incomparable details of reality, and if you designed it right, the system provides outcomes that humans care about (such as telling you which dog is “best”). Humans do this kind of nonsense all the time, and fortunately we have things like dog shows to remind us just how ridiculous it is.

According to the Judging and Standards section of the Westminster Dog Show’s webpage, the specimens of different breeds are evaluated against one another according to the following system:

Each breed’s parent club creates a STANDARD, a written description of the ideal specimen of that breed. Generally relating form to function, i.e., the original function that the dog was bred to perform, most standards describe general appearance, movement, temperament, and specific physical traits such as height and weight, coat, colors, eye color and shape, ear shape and placement, feet, tail, and more. Some standards can be very specific, some can be rather general and leave much room for individual interpretation by judges. This results in the sport’s subjective basis: one judge, applying his or her interpretation of the standard, giving his or her opinion of the best dog on that particular day. Standards are written, maintained and owned by the parent clubs of each breed.

To get around the fact that these dogs are in a sense incommensurate, a system has to be designed that can, nonetheless, compare them. And the result, in short, is something of a contest of Platonic ideals. The closer a French Bulldog, say, comes to what people have collectively identified as its essence, the better it will fare against other Frenchies, and the better it will “perform” against other dogs who don’t so perfectly embody their breed’s ideal characteristics. This is a contest to best embody the quintessence of one’s kind, a step removed from asking which dog is most like its ideal self.

Which is absurd, except that we do it all the time. People compare athletes across sports, musicians across genres, and writers across eons. We compare the utility or “costs and benefits” of vastly different government policies, and we feel comfortable assigning dollar values to just about anything.

I’ve been reading a terrific book by Pierre Schlag, The Enchantment of Reason, that I want to tie in here. Schlag basically argues that reason is a system of belief that requires faith, and that while it can consistently answer some questions, often it’s just the language in which people express their interests and preferences. In other words, the institutions that rely on “reason” (e.g. law, economics, etc.) always depend on the same circularity and hypocrisies as the dog show. The outcomes are just the delayed realization of their axioms. And like the dog show rules, these axioms we live by are a decision that can never be fully grounded in reason.

One of the most interesting chapters in Schlag’s book points out that “reason” breaks down most obviously when it’s asked to compare things that are incommensurable. To use his example, how can you reasonably conclude whether eating apple pie or reading Wittgenstein is a better use of your time? Which provides more utility? Or more happiness? Or satisfies a more important desire? Which time horizon is more appropriate — short-term or long-term interest? And whose interests, yours or society’s? The answer to which activity is “better” is simply a function of which system you use to ask the question. All it does is hide the ball and give the appearance of reason to an arbitrary choice that does all the work.

It’s one thing if the system is one for evaluating dogs to gratify the economic desires of dog breeders and the egotistical yearnings of wealthy dog owners,  but what if this same problem really plagues the systems that underlie most of our public institutions? Why do we pretend that law is an orderly, rule-determined game, when the referees and agenda-setters can often pick whatever criteria they want? Or that we can put prices on lives or on art or on our health? The glib answer is that it’s necessary to make society work, but that only goes so far.

As with the dog show, it certainly appears more legitimate to pick a set of rules than for someone to arbitrarily pick winners. But picking rules itself can be thinly veiled exercise of arbitrary power. (Like Bush v. Gore which essentially picked rules after the fact as a pretense to pick the President in the 2000 election). It’s not an uncommon observation to say that if the dog show mattered at all, these rules would be intolerably vague. They do nothing to constrain the whims of the decision-makers. There’s no basis for thinking that a dog that does well one year would do as well under a different set of judges, etc.

To risk comparing the incomparable, these are precisely the same problems that plague the operating rules in the economics profession, courtrooms, insurance companies, and countless other public and private institutions where allegedly disinterested judges or observers apply allegedly objective criteria. These systems are just slightly better at hiding their arbitrariness (at least most of the time). They are more opaque and cryptic about how fundamentally unreasonable their assumptions are, and they enjoy positions of power that provide a patina of authoritativeness. So in the end maybe the dog show isn’t so bad after all. It’s not any less reasonable than these other institutions, and the stakes, at least, are not quite as high.

4 Comments on “Dog Shows and the Illusion of Order”